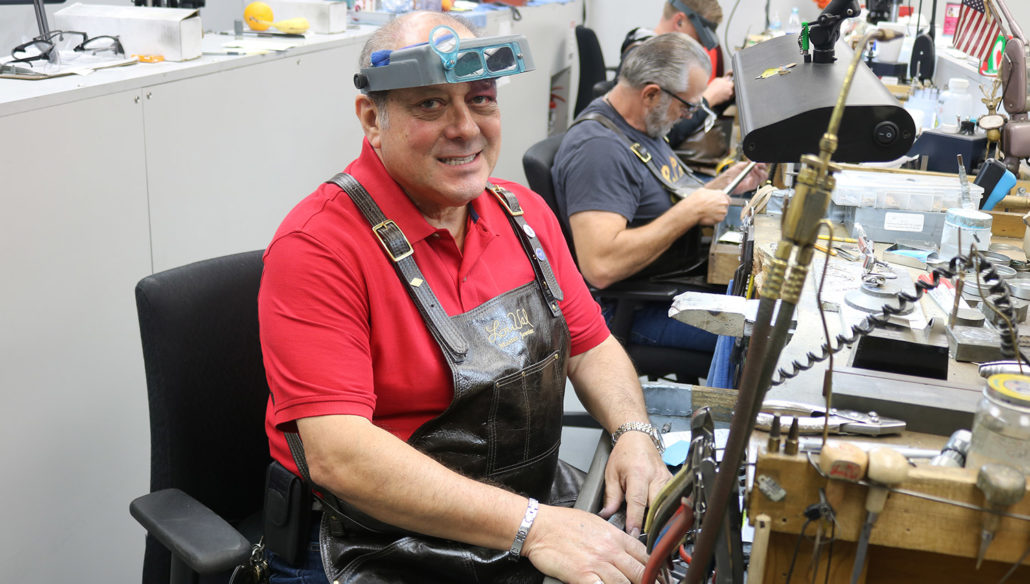 Beyond Bling is a series that takes a look at Borsheims and our employees off the sales floor. Our second installment highlights one of our beloved jewelers, Louis Valdés.

On October 2nd, 24 years after he joined our company and exactly 50 years since he first sat at a jeweler’s bench, the Borsheims family said goodbye to master jeweler and friend Louis Valdés as he retired. A consummate professional, Louis has left a lasting impression on countless people from customers to fellow associates.

“Louis is a man of great integrity, sentimentality, and passion. He lived his life working in the jewelry industry, making one of a kind treasures that will be passed down from generation to generation. It’s been an honor working with a man with so much creativity and amazing character. You will be missed, Lou Val.” – Sue Wurth, Borsheims Shop Manager 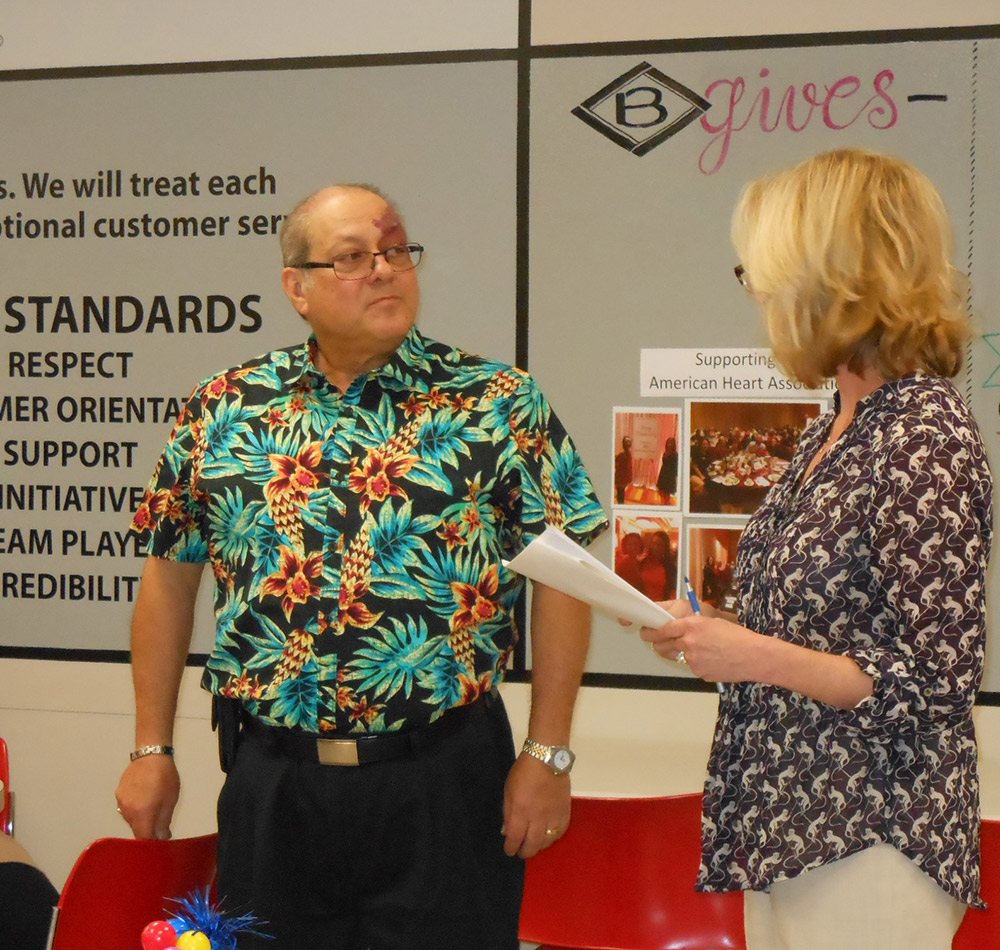 When Louis was 12 years old he started his jewelry journey. His dad knew a gentleman named Carlos who was a master jeweler and let Louis come and watch as he worked. After about three months Carlos said “Louis you can start to make wire” (a big deal at the time as all jewelry components were handmade unlike now when you can just purchase things like wire). Eventually he got to try things like casting and grow in his knowledge. Carlos left Louis with one piece of advice he never forgot, “practice, practice, practice” and that is what Louis has done for much of his career. At 15, Louis began working on small pieces like jump rings and bales for a local shop in El Paso, Texas. At the same time, he became well known for turquoise and silver jewelry pieces he would make and sell at the Shell gas station he also worked at, his first taste of entrepreneurship.

At 17 he started working for Josten’s (the company responsible for most high school class rings) and worked his way up into the engraving department to manage touch-ups and repairs. Then in 1980, Louis returned to business ownership and opened Lou Val Jewelry & Manufacturing where he perfected skills such as mold cutting and pave. 15 years later, Louis decided it was time for a change as he was working very long hours and wanted more time to spend with his wife and children. He answered a posting in JCK Magazine that fortunately for us, led him to Borsheims Fine Jewelry & Gifts. An incredible Master Level jeweler, Louis also earned his Graduate Gemologist degree while working at Borsheims. In 1999, Louis was awarded our prestigious “Ike It” Award after fellow associates nominated and voted for him. Borsheims’ Ike It Award is named for long-time charismatic owner, Ike Friedman, and honors his legacy of customer service, hard work, loyalty, and dedication. 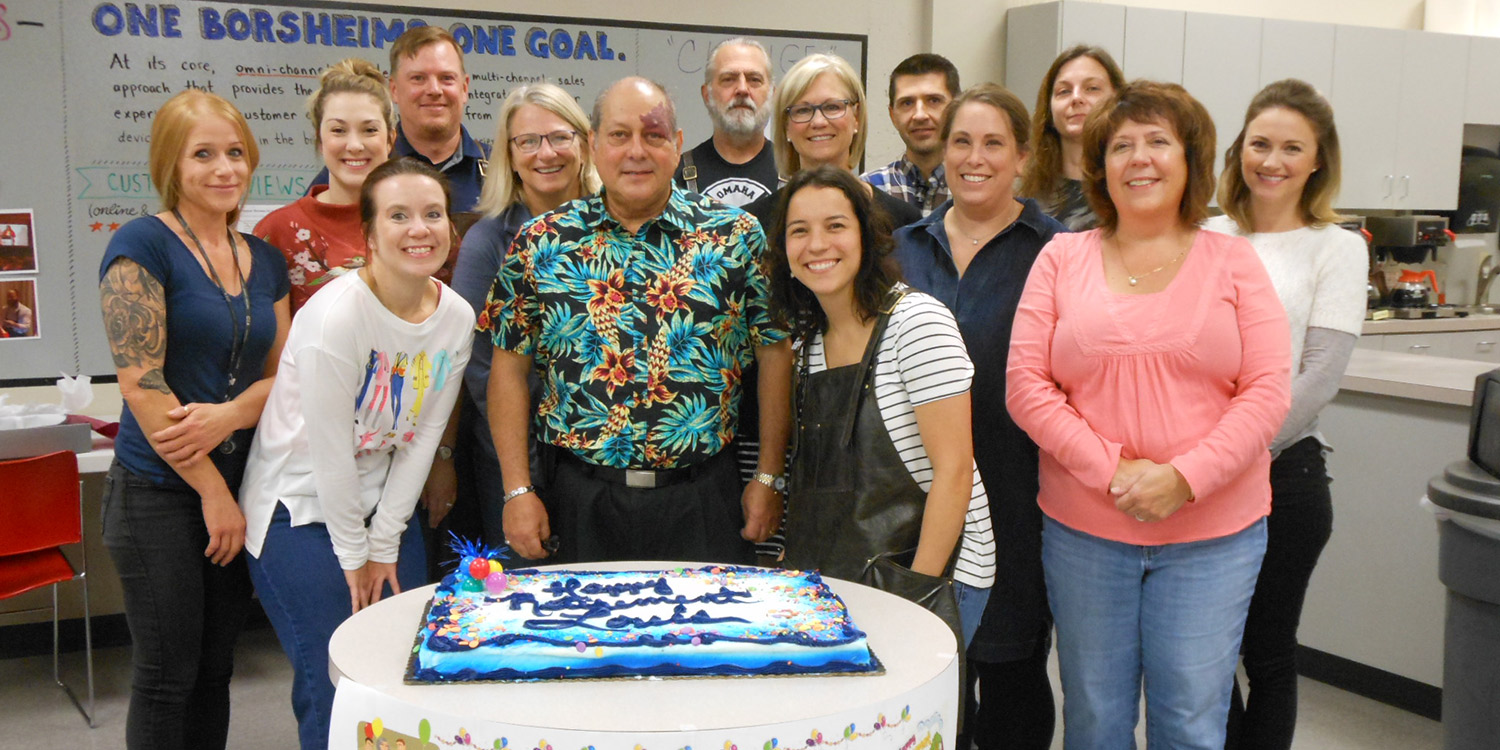 “Borsheims was lucky to hire Louis in 1995. He didn’t know anything about Omaha, but when he came to visit Borsheims for the first time, he said he was in awe. He gave so much to Borsheims and to his craft. He will be missed.” -Jennifer Johnson, Vice President of HR & Retail Operations Officer

Overall Louis loved working with customers to create pieces that truly meant something to them. “I mainly work on the wedding ring side of things so it’s great to work with customers and learn all about their lives and their stories. They aren’t just buying a piece of jewelry; this represents the love they have for each other.”

Not only will Louis’ legacy live on at Borsheims through the pieces he created and lives he touched; his son Henry Valdés also works at Borsheims in our Watch department, “I will miss my father, mentor and best friend. He truly will be missed at our store and I am grateful to have had him teach me all that I know about jewelry. I wish my father the best in his new chapter in his life. You’ve earned a long due rest from the bench. Thank you for your love and passion for your art. Love you dad!” 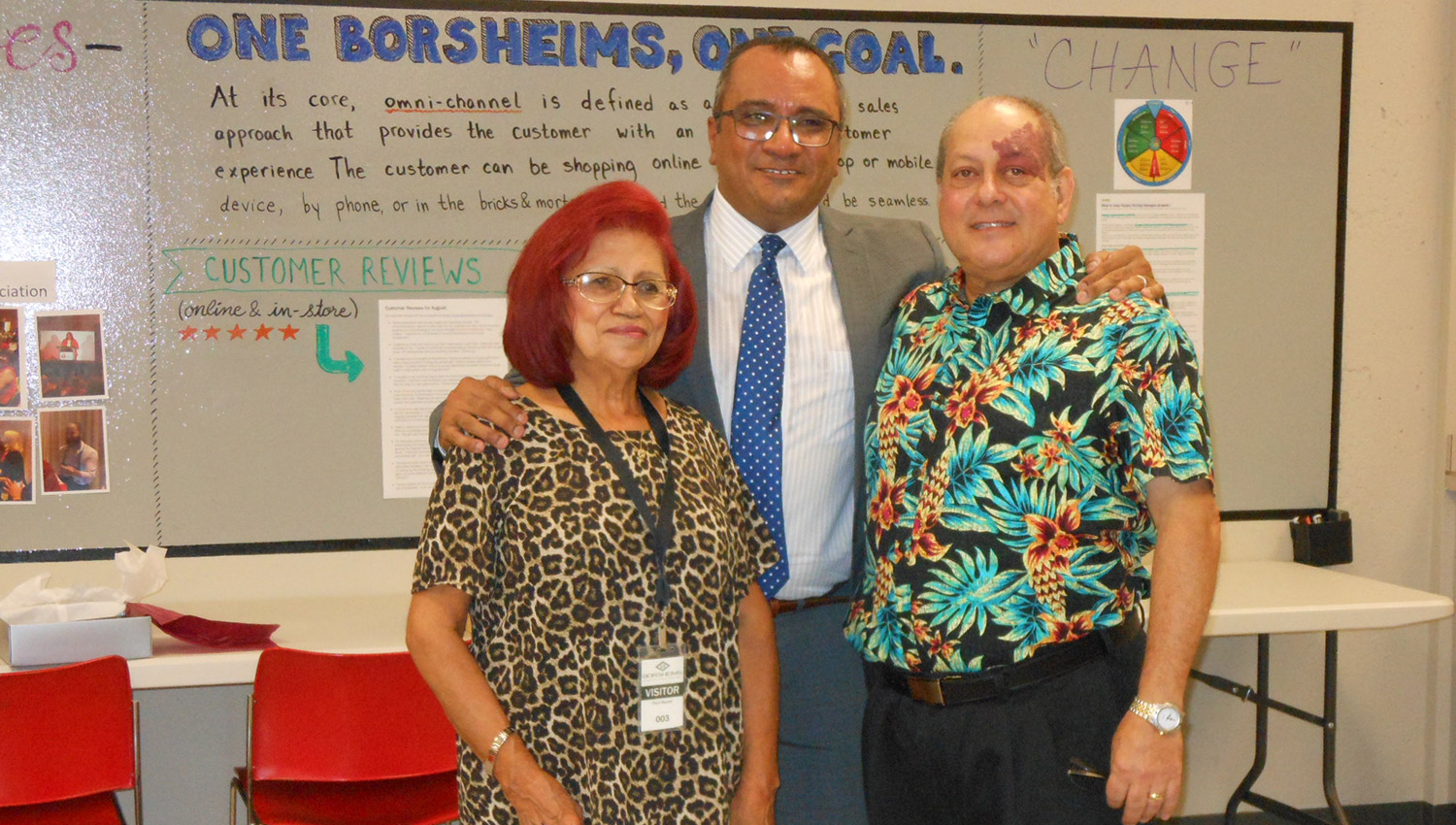 Before Louis left us to spend more time with family and friends we sat down with him to ask a few questions about his career and time at Borsheims.

What changes have you seen in the jewelry industry over your career?
New metals and alloys have been introduced. New computer programs and more specialized work for jewelers — the introduction of casting and cad cams.

Favorite Borsheims story or memory?
I’ve always enjoyed working during BRK weekend and getting to know different customers. One year I had a customer that was an architect who made sketches of several different ring designs that said: “Sara will you marry me?” He wanted to know which of the designs were possible to make into the real thing, so I selected a few sketches. He then had his soon to be fiancé pick her favorite. It, of course, was one of the more complicated designs with a prong that needed to essentially wrap underneath the princess diamond, but I was able to make the engagement ring for them. She could not believe her eyes when it was finished.

Any advice for those wanting to learn more about the industry or interested in becoming a jeweler?
Smile. Whenever I’m working with a customer putting on a smile is the quickest way to make them feel comfortable. And in working with my fellow associates, a smile can go a long way. 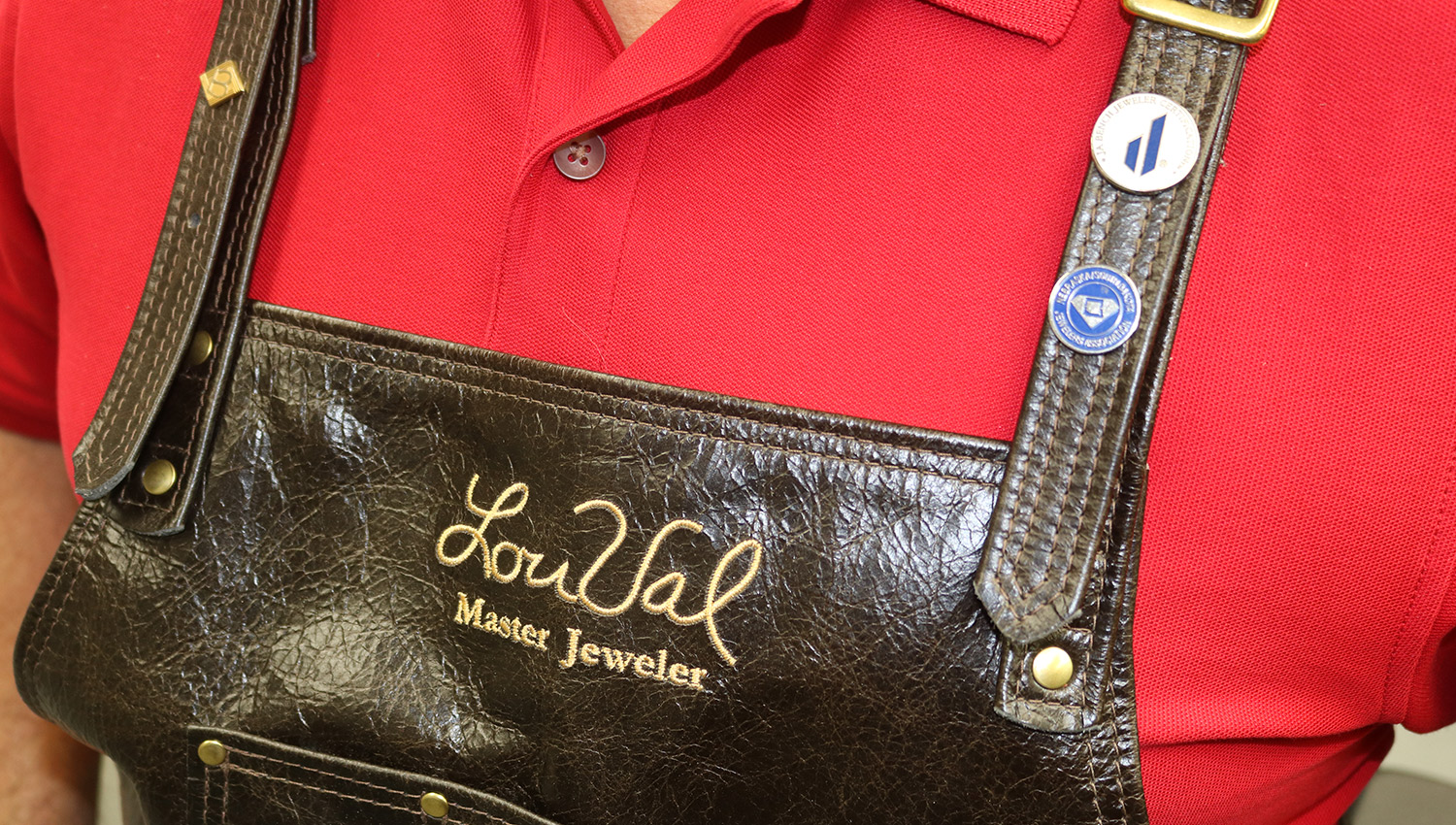