Alexandrite is a rare form of chrysoberyl. First discovered in 1830 in the Ural Mountains in Western Russia, alexandrite is one of the rarest gemstones in the world. The finest examples of alexandrite have the unique characteristic of appearing green in natural or fluorescent light and glowing brownish or purplish red in incandescent light. While other gems can change color depending on a light-source change, Alexandrite’s is so dramatic that the phenomenon is often called “the alexandrite effect.” Alexandrite’s color changing properties are due to trace amounts of chromium.

Where is Alexandrite Found

The Ural Mountains’ mineral deposits were depleted. Today Alexandrite is found in Sri Lanka, Zimbabwe, and Brazil. Deposits have also been found in Burma, Madagascar, and Tanzania. Most stones are smaller than a centimeter.

Due to limited supply in nature, lab grown Alexandrite was created in the 1960s. Alexandrites can be grown through melt, hydrothermal, or flux methods in a lab. These synthetic stones have the same chemical and physical properties as natural alexandrites. Although the synthetics are far less expensive than natural alexandrites, they’re still among the most expensive synthetic gemstones available. They tend to have a blue to purple color change.

Natural alexandrite is very rare, and even lab-created stones are expensive. When certain types of long, thin inclusions are oriented parallel to each other, they can create an additional phenomenon called chatoyancy, or the cat’s-eye effect, increasing the alexandrite’s value.

Alexandrite is one of the three birthstones for June, and the gem of the 55th wedding anniversary. It’s stunning color-changing property lends itself well to rings and face framing earrings and pendants. 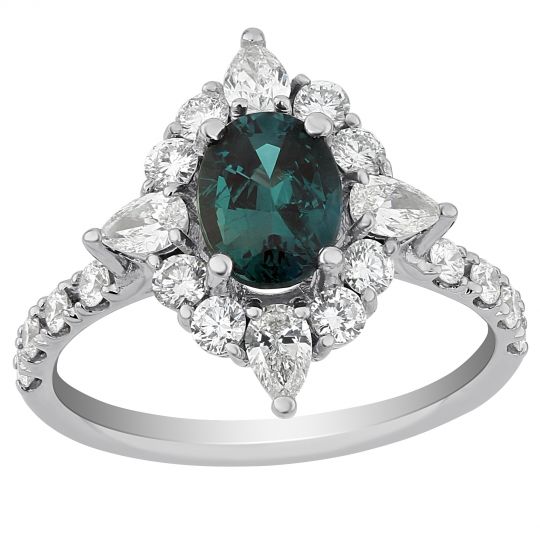