What are Cultured Pearls

Cultured pearls are pearls that have been intentionally grown and farmed by oyster, mussel, and clam farmers in more than 5,000 pearl farms around the world. The farmers introduce an irritant – often a shell bead or a piece of tissue – into the mollusk. The irritant then causes the mollusk to produce a secretion which forms the layers of nacre on the shell bead. (This is the same process that happens in natural pearls, only the irritant naturally finds its way in naturally.) The process of growing a cultured pearl takes as little as six months, but the longer the irritant is left in the mollusk, the larger the resulting pearl will be. Until about 100 years ago, all pearl jewelry was made up of natural pearls (no intervention by man).

Saltwater cultured pearls are grown in oceans, seas, gulfs, and bays. The most popular of these is called the Akoya pearl, which is grown off the coast of Japan. Akoya pearls range from about 6mm to 8mm in diameter and are usually white or cream in color. Australian South Seas and Tahitian pearls are also very popular and are some of the largest in the world, ranging from 8mm to 18mm or larger.

How do you tell if a pearl is natural or cultured?

With a little education, you can generally determine if a pearl is naturally occurring or a cultured pearl. For one, natural pearls are extremely rare and nearing extinction. Over the past two centuries, divers have depleted most of the natural pearls in the world’s oceans. It is estimated that only 1 in 10,000 mollusks in the wild will ever produce a pearl and that very few of those pearls produced will be of jewelry-quality. Because natural pearls are so rare, nearly all pearls sold in jewelry stores like ours are cultured pearls.

Even though natural pearls are rarer and more expensive, cultured pearls are still considered very valuable! Cultured pearls value/price is generally determined by the size, shape, and characteristics of the pearl as well as whether the pearl is freshwater or saltwater.

It’s important to remember that cultured pearls are considered real pearls. They are produced by living organisms, and are identical in make-up to a natural pearl. The only difference is they had a little nudge from humans to start growing the pearls.

Prior to being set in jewelry, pearls are routinely treated to enhance their color by bleaching, buffing, coating dyeing and irradiation. Bleaching is routinely performed on most pearls to remove darker spots and it is usually undetectable. Cultured pearls are buffed or polished to enhance the luster, and this again is undetectable. Cultured pearls are sometimes coated with lacquer, temporarily improving luster, but eventually it will wear off. Dyes may also be used to change the color of a cultured pearl, but are considered less valuable than one of the same color occurring naturally. Irradiation can also be used to change color-giving cultured pearls a metallic look. Our jewelry experts are happy to talk with you and explain any treatments that have been used on particular jewelry pieces.

Because pearls are an organic gemstone, special care must be taken to maintain their beauty. The best care for pearls is to wear them – the natural oils in our skin keep pearls lustrous. Avoid exposing pearls to chemicals such as hairsprays, make-up and perfume, as well as household chemicals. Our jewelry experts always say pearls should be the last thing you put on and the first thing you take off. After wearing your pearls, make sure you wipe them down with a soft damp cloth. Should they become soiled with perfume or make-up, you may use very mild soapy water. Do not submerge your pearl strand in water as this may weaken the silken threads. Professional cleaning is recommended. Never place pearls in jewelry cleaners or ultrasonic machines. 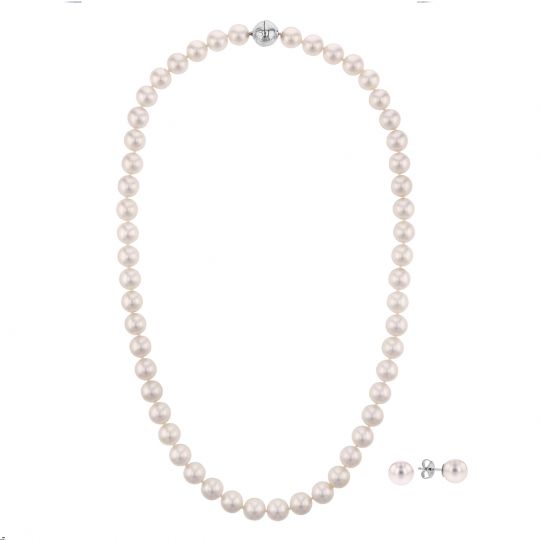