What are Tahitian Cultured Pearls

Tahitian pearls are saltwater cultured pearls that are produced from the tropical islands of French Polynesia. Pearl farmers in the islands implant a bead into a large black lip oyster, which then produces a nacre surrounding the bead and creates a cultured pearl. The resulting cultured pearls are prized for their beauty, their nacre, and their naturally dark body color. They are often called “black pearls.” Tahitian black cultured pearls have been on the market for just thirty years.

Tahitian cultured pearls are not actually cultivated on the island of Tahiti, but they are exported from Tahiti after being farmed on nearby islands. The Tahitian cultured Pearls are so named because the Tahitian Ministry of Perliculture sets quality standards for all the pearls leaving the islands – and their standards are high! If a cultured pearl doesn’t have a minimum nacre thickness of 0.8mm or more around the bead nucleus, the Ministry destroys it.

So the big question is how much does a Tahitian cultured pearl cost? As always, it depends on the quality of the pearl. The size, nacre, coloring, shape, and inclusions on a pearl all affect the price. While there is no official grading system for the pearl industry as a whole, the grading system of Tahitian cultured pearls is mandated by the French Polynesian government. The system grades on a scale of A to D, with A being the best quality.

Tahitian cultured pearls should be cared for in the same manner as any other pearls – whether they’re South Sea cultured pearls or natural pearls. Pearls want to be worn – they can dehydrate if left in a jewelry box or safe too long. But when pearls are worn, they should be the last thing the wearer puts on and the first thing they take off. Because they’re organic gemstones, they are sensitive to oils, perfumes, and any chemicals. Pearls can be wiped off with a clean cloth or, if soiled, cleaned with a lightly soapy mixture. Pearl strands should never be soaked in water because the silky threads could be damaged. 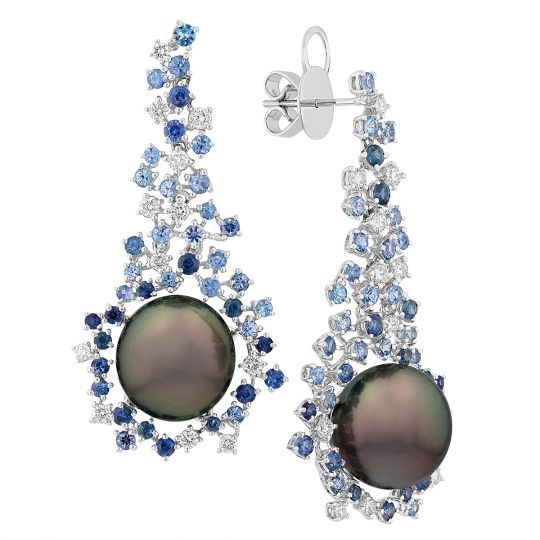